For my digital artefact I wanted to make something.  Something that while satisfying the ‘digital’ part of the project was also a physical manifestation of the research.  For that reason, additive manufacturing (more commonly known as 3D-printing) was the perfect medium for the assignment.

So, I knew I wanted to print something, but relating 3d-printing to the concepts presented in the Future Cultures subject was the part I needed to figure out.  It wasn’t until Chris spoke about objects that we take for granted like eye-glasses or phones or SHOES, making us ‘cyborgs’ did it hit me.  They were the perfect pairing; the cyborg, a melding of machine and man, and the future capabilities of a technology like additive manufacturing.

Figuring out how I was going to do this was the next step. This wasn’t hard, with the talk in class of the ‘cyborg’ concept being far simpler than the examples we see in sci-fi films I knew I could leverage the idea in a way that would satisfy my own passion of footwear.  Additive manufacturing in the footwear industry has been a major topic of the last few years. All the key brands are investing heavily in the technology as it has potential to revolutionise, not only the footwear, but how we manufacture all goods.  My second blog post ‘You Gotta Have Sole‘ went into some detail about where companies like Nike and Adidas are currently taking the tech.

One of the biggest revelations from the use of 3D printing in footwear is how it may be implemented in the future.  Presenting at a tech summit held by GeekWire in 2015, Nike’s COO Eric Sprunk spoke about the possibility of a future where you can make your own Nike shoes at home.

He said;
“Do I envision a future where we might still own the file from an IP perspective — you can’t just have anyone making a Nike product — and have it manufactured in your own home or we do it for you at our store?” “Yeah, that’s not that far away.”

But, one must wonder how much they’ll charge for you to make your own shoes considering what has been reported in the past about their own labour practices…

Really, this isn’t such a hard future to imagine.  If additive manufacturing in the home becomes widely adopted (what actual catalyst function it could provide to get it to that point is up in the air), then it could very well be the way of the future.

With Sprunk’s comments in the back of my mind I set out to explore the ‘3D-printing a shoe at home’ concept myself.  Unfortunately, in the few years since the COO made that statement Nike is yet to release anything remotely like that.  Obviously, these things take time.  But as the 3D-printing race heats up in the industry, there is definitely a renewed spark around the implementation of the technology going forward.  Maybe additive manufacturing technology in the home is something that we won’t see for a few decades.  But at its current rate of growth, massive investment across a range of industries seems a certainty. Printing in its most basic form has been the catalyst for major advancements in our history.  The invention of the printing press by Gutenberg in the mid-1400s birthed an information revolution.  It made the spread of knowledge rapid and accurate, taking it out of the hands of the Church and into those of the people.  Literature of a secular nature was far more easily disseminated, and by the 1600’s the printing press would lead to a new age in scientific revolution, the ‘enlightenment’ (Butler, 2007).  Now, inkjet printers are easily and cheaply bought and are an essential part of any business and even household.  It may have taken the best part of 600 years for the printed word to reach that point, but this could be the future for 3D-printers too.

Throughout this semester my research has been primarily focused on the uses of additive manufacturing in regards to footwear, and as was pointed out after my presentation this is a very micro view of what is very much a macro research topic.  But I saw it as a way to make the content accessible and relatable for myself.

As my digital artefact I wanted to try to make my own 3D-printed shoe (well, at least the sole).  It would be the melding of the future culture and the future tech.  In her seminal work, 1984’s ‘A Cyborg Manifesto’ Haraway isn’t talking about the metal-man of films, she is speaking of the blurred lines between the natural and the artificial. The age of the cyborg isn’t some far off dystopian future, it is here and now (Kunzru, 1997). As Kunzru (1997) writes, “It’s about athletic shoes.”  In her interview for Wired, she said “Before the Civil War, right and left feet weren’t even differentiated in shoe manufacture. Now we have a shoe for every activity.”  Of course this is a neat little excerpt that ties in with my focus of footwear as a cyborg extension, but it’s a good way to understand the deeper concepts Haraway is proposing. The cyborg is about how we have built these systems around us that constantly work to alter the natural.  That fact that we have even created an industry that says we need to wear something to protect the soles of our feet (because obviously the ‘natural’ hadn’t worked for 200,000 years) is a manifestation of the cyborg idea.

When it came to actually starting my digital project, I wasn’t really sure where to begin.  As I’ve stated previously, I am someone with absolutely no experience using any type of CAD software.  Which also seems to be the running theme amongst those attempting these types of projects (3D printing, Virtual Reality, etc.) for their digital artefact.

In the search for some CAD programs I came across things like ShoeMaster Sole Design and Delcam CRISPIN ShoeMaker.  Both looked like they would be straight-forward options, as they are purpose built for designing shoes (if the names weren’t obvious enough).  However, neither were available for free download.  I thought that looking for footwear specific CAD programs was probably going to produce very little in terms of things I could use, so I decided broaden my search.

Blender a free and open source 3D creation suite seemed to be a fan favourite, with a bunch of beginner’s tutorials to be found on YouTube.  I discovered the Australian YouTuber, Blender Guru’s  ‘Blender Beginner Tutorial Series’ to be a great place to start.  He did a fantastic job at introducing newcomers like myself to 3D-modelling, and more specifically the Blender program.

What I found more useful though was another of his series where he showed how to create a blacksmith’s anvil using Blender.

The shapes and overall construction methods seemed to more closely resemble what I thought I would need to do to create a model for the 3D-printed sole.

Now that I had the software and some guiding knowledge of how to use it, it was time to sketch out some prototypes to get a feel for how the finished product would look.  My design was an amalgamation of the Nike Zoomfly, and Futurecarft 4D by Adidas. 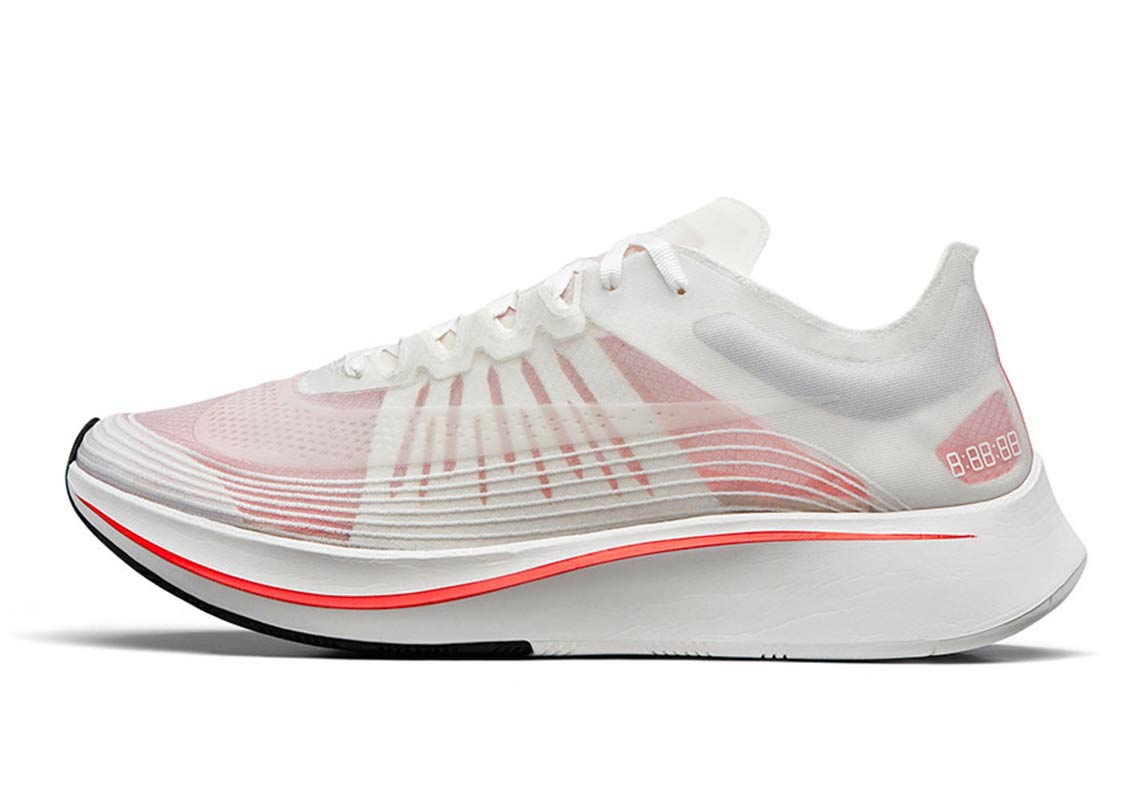 I was pretty ambitious, with some intense lattice structures being the designs main component.

Using Blender I would be able to create a printable model of the shoe sole using CAD, and then produce the sample using the 3D-printers found in UOW’s MakerSpace.

There were however some limitations I needed to consider;

Despite these limitations, I thought I might have found my saving grace.  When talking to one of my friends about the project he revealed his brother actually had one of the Cocoon Create 3D-printers that could be found at Aldi a few years ago.

While the size and material concerns were still an issue, it would mean I could print closer to home and sans induction course.  Now I just had to make a 3D model of my design.

I played around with the Blender program and was able to get the basic shape and design down for the midsole.  It was still a solid object as I couldn’t find anything about how to create the mesh/ lattice structure that would provide the shock absorption and flexibility.  The model I had made was rudimentary, but it was enough to convey what I was trying to achieve.

I did consider using a pre-modelled design I found on Thingiverse by creator AndresVH.  His design was more in-line with my concept sketches, and while it wouldn’t be my own it would still be something that I could print.

The last few weeks of semester were coming and I didn’t have much time left to produce the sole.  That’s when disaster struck.  My laptop asked me to update to the latest version of Windows 10.  Yep, great, done… I left it do its thing.  But when I returned, it was in a boot loop.  I wouldn’t recognise its system restore points, it wouldn’t roll back the update, and it wouldn’t even reset the laptop.  Four phone conversations with Microsoft technicians, and multiple trips to the guys in the IT department at work and the only solution was to wipe the entire system by clean installing Windows again.  I lost everything.  At the time, it wasn’t my CAD file I was worried about.  It was more about the music, movies and photos.  But the lost years of university work also hit me later.  You would think that surely I had it backed-up externally.  Yes, I did but it was from probably 2 years ago.  And as I would come to find, the hard drive it was stored on was corrupted from being dropped.  So please, this is an appeal to anyone who doesn’t back-up regularly.  DO IT or your system will inevitably fail at the most inconvenient time in your university life.

After cutting my losses with the computer I tried to look for alternatives. I found this video by YouTuber name notimportant explaining how to model a shoe using Autodesk’s Fusion 360 software.

That video led me to video from Adafruit Industries which showed him modelling something using Fusion 360 then exporting it and using the MeshMixer program to make a lattice design.

After seeing this I downloaded Fusion 360 to see what I could do.  In theory, I would be able to use the two programs to finally create the lattice 3D model I first envisioned.  But after countless videos I just couldn’t get the hang of it.  The best I could do was to create the rough outline and extrude the shape to the correct height.  I just couldn’t learn how to do what I needed in the time I had left.  I just became too technical, and with more time to practice I’m sure I would have got the hang of it.

The project has been a complete and utter failure in terms of creating the printed shoe.  However, it did help me to gain a deeper understanding of the concepts presented in BCM325.  The research made me fully consider the impacts of how we view our current technologies and apply them in the future.

One thought on “Footwear of the Future; A Digital Artefact”